I had the opportunity to combine a three day fishing trip with Wes, Dan and Mike with a 2 day hunting/fishing trip with Matt, Jesse, and Dan.  What I ended up with was 5 straight days of trout fishing in the Catskills and State College.  It's the first time I've don't that much trout fishing in the Fall, let alone over five straight days.  I guarantee you it won't be the last.  What a gorgeous time to be on the streams.  Great weather, water conditions, and the fish were active.
​
DAY 1 started on a Friday visit to the Neversink with Wes.  We left dark and early and made it to the parking lot not too long after light.  Oh, and with no power steering fluid left in the Sequoia.  But that didn't stop us!  We hiked 2.5 miles down into the gorge and fished all day on the most wild, beautiful, and treacherous river I've ever seen.  The pocket water was fast and deep.  One wrong step and you'd be swimming, or worse.  We inched our way along catching tons of wild browns.  The hike out ... happened.  This place is no joke, and we'll definitely be back. 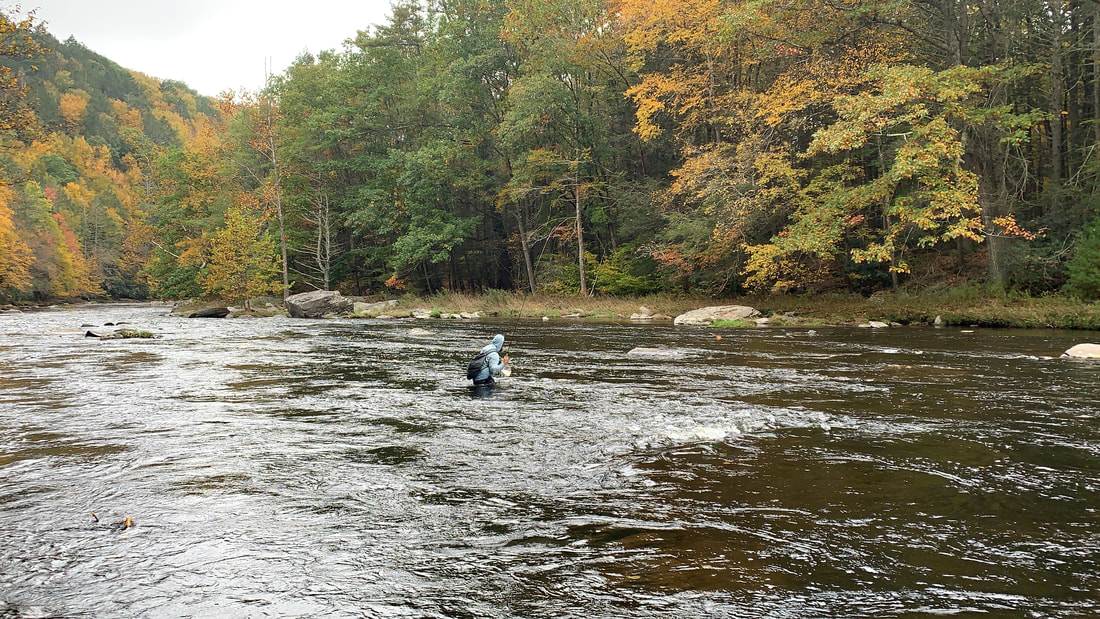 DAY 2:  After the Neversink we drove about an hour to the West Branch Angler where we had a great steak and potato dinner (thanks Wes) and waited for Mike and Dan to arrive.  The resort is great and the cabin was perfect.  At 8AM the next morning we were headed downriver in a pair of rented drift boats.  Dan tried to sabotage the trip by throwing an oar lock in the river, but we recovered it with much yelling and jumping overboard.  Wes caught the only fish, but we had a blast drifting down the river, getting yelled at by guides, and surviving a gigantic rainstorm. 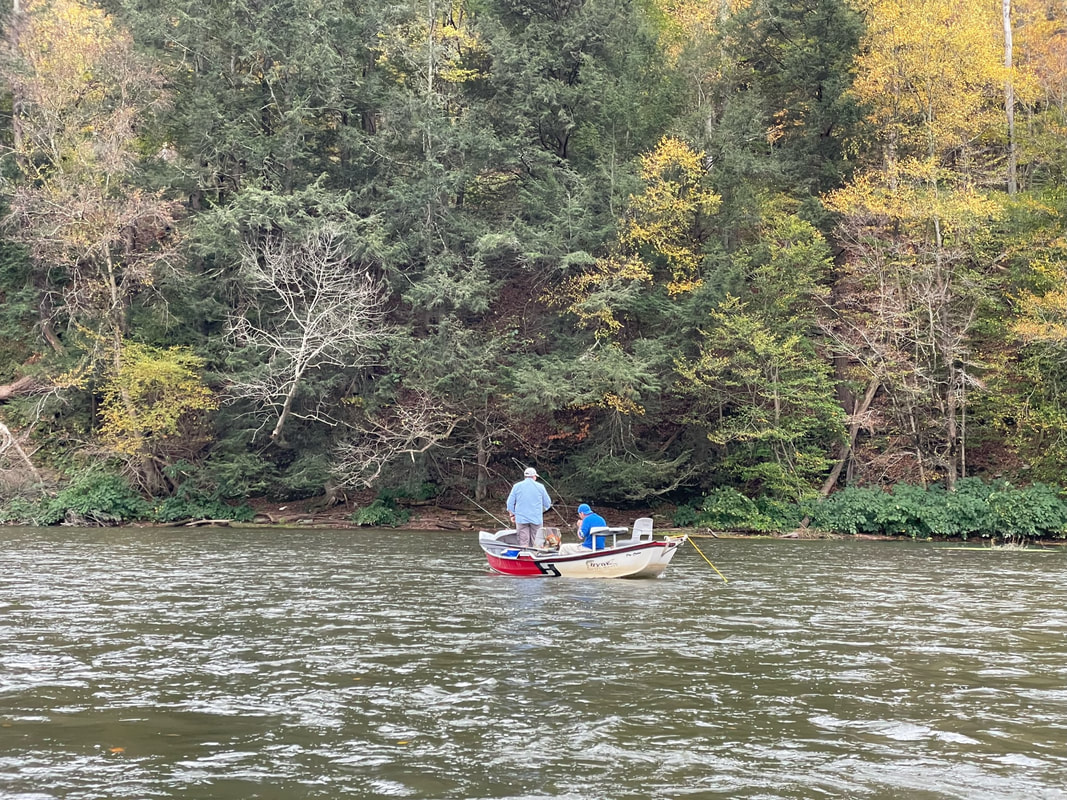 DAY 3:  It rained pretty hard Saturday night so drifting the DE again was off the table.  Dan had left the night before so Wes, Mike, and I decided to hike up Faulkner Creek, a class A tributary to the DE.  It took us half the day to figure out we were actually on Balls Creek, much to our immature delight. I'm sure glad we made this mistake because Balls Creek is real gem.  It's decent sized for a trib but has plenty of wild browns and rainbows.  The fish were small to medium, with the chance at a true giant coming up from the big river to spawn.  That afternoon we found the real Faulkner Creek and landed a handful of small brookies and rainbows.  What a day!  All three of us completed a Trout Slam of all wild fish.  That's not something many people can say. 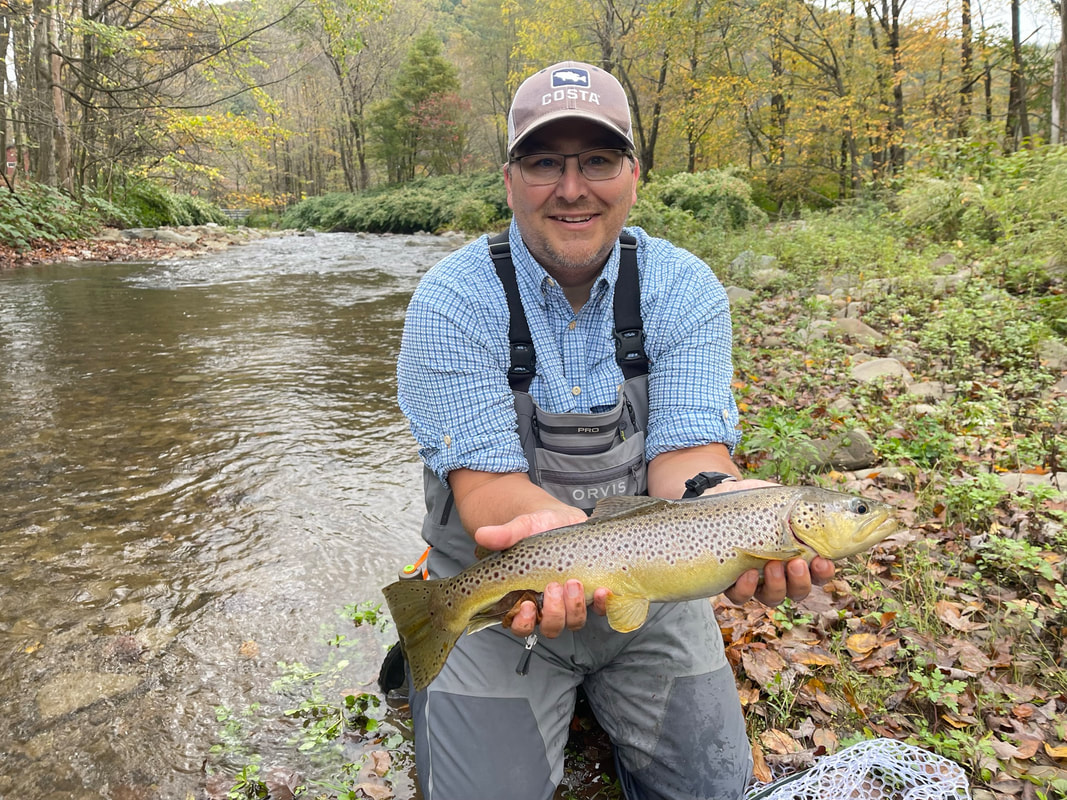 DAY 4&5:  After a long drive from the Catskills over to Snow Shoe PA it was nice to relax with Dan, Matt, and Jesse.  Those three guys are die hard hunters who logged some serious miles in the woods of northcentral PA.  Unfortunately the deer the didn't cooperate with them.  But the trout were more than willing.  I spent two days fishing on Spring Creek.  I fished up above Fisherman's Paradise.  It's a beautiful area with excellent access and tons of trout.  It also has tons of pressure.  Not my style.  I much prefer the section from Logan Branch down to Bald Eagle Creek.  It's bigger, faster, deeper, and in my opinion has bigger fish.  It's just more my style.  I caught 21 fish the first day there and 17 the second.  The average size was nice too.  I really enjoyed catching a few hard fighting chunky rainbows that pulled hard on the drag.  Nothing like catching a bow in shallow water and having it go crazy.  That's just a special creek!