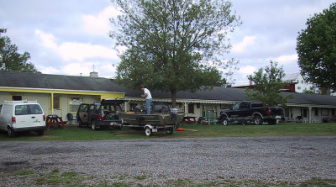 Campbell and I had been talking for a while about finding a decent pike lake somewhere a bit closer than northern Ontario.  After some careful Google work we choose Black Lake in northwestern New York.  We made a somewhat mis-guided trip to Black Lake in the fall of 2003 but re-grouped and returned the next Spring.  We chose The Sunnyside Motel as our lodge.  We had a nice clean room with plenty of space and decent amenities.  Jason did break one of the kitchen pots, but the whole shower naked open door debacle that followed was rather amusing.