Dude, its Creepy Out Here 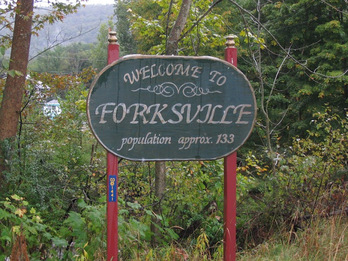 Mike and I decided to take a long weekend in the Fall of 2003 and go trout fishing in and around World's End State Park.  Apparently nobody else had similar plans because we were the ONLY two people in the entire state park.  I'm telling you it was creepy.  The first night was crazy, there was absolutely nobody else around .... anywhere.  And it was dark.  I mean really dark.  None of the campground lights were on so bumping into trees on the way to the bathhouse was a normal occurrence.

We were a little nervous, but excited too.  We had three days of hiking, biking, and fishing to do.  It was going to be awesome!

Rain, Rain go Away .... Send Some Wild Trout Our Way 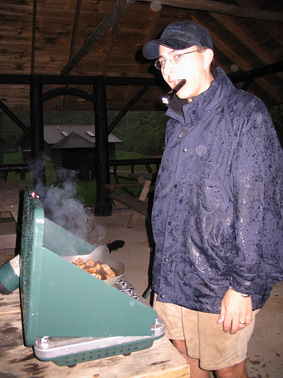 So after a quiet night of Mike snoring loud enough to wake the dead, we woke up to a dreary, rainy day.  Mike is not one to be discouraged easily, so he located an empty pavilion and we set up shop to begin cooking breakfast.  We had plenty of good food and actually had a rather nice, dry breakfast in the pavilion.

Later that morning the rain let up and we decided to venture out looking for a particular class A wild trout stream we had read about.  With map in hand we drove a few miles outside of town and found where this small, unnamed stream dumped into the larger creek.  Man I'm telling you that little creek was no more than 24 inches wide.  Mike wanted to explore it anyway, so we did.  To our surprise and delight, that little trickle opened up into a picturesque little mountain stream babbling from one plunge pool to the next.  We had a great afternoon hiking up that stream catching little native brookies on small spinners.

Another Epic Day of Hiking

It was supposed to be an epic day of fly-fishing on the Loyalsock Creek for huge trout.  Well, it was epic all right!  It was a gorgeous sunny day and we fished up that creek for miles.  After catching a grand total of zero trout, we set to hoofing it back to the car.  We certainly found some interesting things during our walk.

We really were having a good time, but after two days of staring at each other, we ran out of stuff to talk about.  So what do two fisherman do when the fish aren't biting and there is nothing to talk about?  Simple, we packed up the Geo and went home.  Oh, speaking of the Geo, did you know one of those little cars can hold about 900 pounds of firewood?  Yup, it can.

But before leaving, we did find time to take a lengthy hike up one of the mountains to a fantastic look-out spot.  Amazing!