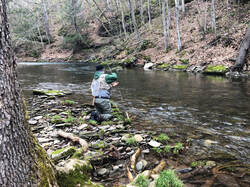 Dan had been threatening for years to put together a fly-fishing trip for guys from church.  Well he finally did it and in late April 6 guys, two trucks, 40 coolers of food, and a ton of fishing gear all headed north to the Pennsylvania Grand Canyon.

Depending on who you ask, the goal was to either fish Pine Creek for numbers and size, or to climb around in Slate and Cedar Runs looking for fiery little native brook trout.  Everyone tried their hand at both and Matt even took his shotgun for a walk looking for turkey.  Unfortunately, the group struck out on all fronts.  Well, rumor has it that one member of the group dabbled in the dark art of spin fishing and crushed them, but we won't talk about that.

Well, even if the fishing was slow, man oh man was it still a fun couple of days.  We hung out in a spectacular stream-side cottage where Mark fed us like kings.  No, that's not true.  He fed us BETTER than kings.  Homemade lasagna, creme brulee, baked oatmeal, Thai chicken, chocolate tart, and more!  It was off the hook (pardon the pun).  That bearded man has a special gift, and we were all incredibly fortunate to be blessed by him.

I have to say, honestly, I was impressed and humbled by the attitudes of these guys.  They are kind, helpful, caring, but also competitive and intense without being overbearing.  It was an honor to spend time on the stream together with each and every one of them.  Their perseverance was also impressive.  They logged countless hours on the stream, tirelessly casting over and over, with remarkably little success. And not one single word of complaint.  Ok, not TOO many words of complaint.  The fishing was a grind, but I'd do it all over again just to hang out with Cregan's Crew.

Final thoughts:  Jonathan lies about his age ... he's obviously in his mid thirties.  Paul could spend the rest of life smoking meat and catching brook trout.  I wonder if he would enjoy smoked brook trout?  Probably not.  Mark is good at everything he does.  Seriously, everything.  Cregan likes to yell.  It's hilarious.  Matt has one speed for all occasions in life .... calm and collected.  Honestly, what can rattle this guy?  Jordan has a deep down secret love for rooster tails.