Something old, and something new ....

Its because of my Grandfather that my love for fishing exists.  Over the years he took us on many fishing trips to Canada, and I felt it was high time to give back.  So, to keep with tradition, I rented an RV, made a campsite reservation, and created a grocery list complete with nothing healthy.  So for the "something new" I recruited two of my friends, Chad and Wes, to tag along.  I pitched it to them that I needed help with the driving, but in reality I was looking for two new fishing buddies.  My cousin Norman came along too .... I'm not sure he quite knew what to think of Wes, the OG.

Well, I'm not really sure where to start.  First, before reading any further, to truly appreciate our campsite location, please start making motor noises with your mouth.  Yup, that's it.  Now pretend you heard that sound for five days straight.  Uh-huh, the generator for the entire camp wasn't twenty paces from our campsite.  I could lie and say it wasn't that bad .... or that you get used to it after a while.  Nope.  It was annoying.  Straight up.

But, to make up for the noise, we amused ourselves in the afternoons by playing some game that involved golf balls tied to a string and a PVC ladder.  We also watched Wes destroy a coconut with an axe .... quite entertaining I might add.  I could go on about the ATVs, the near death rollover experience, the backwards hat kids, the orange underpants, or even Laird.  All awesome by the way.  But nothing was better than fresh walleye tacos!

This was to be Wes and Chad's first time fishing "Canada Style".  I had complete confidence that they would take to it like a fish to water, even if they had a few reservations.  So without a word of instruction they quickly found themselves alone on a huge Candian shield lake surrounded by breathtaking beauty and the promise of adventure.  As expected, they found their groove pretty quickly and began catching fish.  They even caught a few new species of fish.  Impressive!  Honestly though, they did great.  The handled the boat like a pro and boated quite a few nice walleye, pike, and bass.  Their go to lure was the "Magic Stick", and it certainly was.

Our boat was a bit less animated than "Team Extreme", but Grandpa, Norman and I held our own.  We did a fair amount of trolling which brought in plenty of fish.  Grandpa might be old, but he sure can fish!  He caught the biggest pike of the trip and plenty of bass and walleye too.  Norman caught some very nice pike and bass, and even a couple of walleye.  Although, I think he spent more time eating copious amounts of beef jerky and goldfish while drinking three cases of Dr. Pepper, but it is vacation after all.

So we had a little run in with the Canadian fuzz.  No Big Deal.  Well, it would have been no big deal if we had our life jackets sorted properly.  Oh well.  $240 later and were back in action.   If it weren't for Wes's good looks and witty charm, we might have gotten out of the ticket, but then that wouldn't have been nearly as good of a story.  Norman was worried about going to jail, Chad was worried his wife would lecture him about responsibility, and the rest of us were worried Wes would start chatting with the Officers again =)

All Good Things Come to an End ...

We had a great week of fishing, hanging out, making memories, and experiencing what Canada has to offer.  I for one had a blast and look forward to our next trip.  It most likely won't be in an RV parked next to a generator, but its sure to be amazing!  Until next time.

And most of all, Grandpa got to see the North one more time.  It just might be his last time seeing the rocky shorelines and the tall cedars of Ontario, and it was an honor to share that with him.  He is a remarkable man! 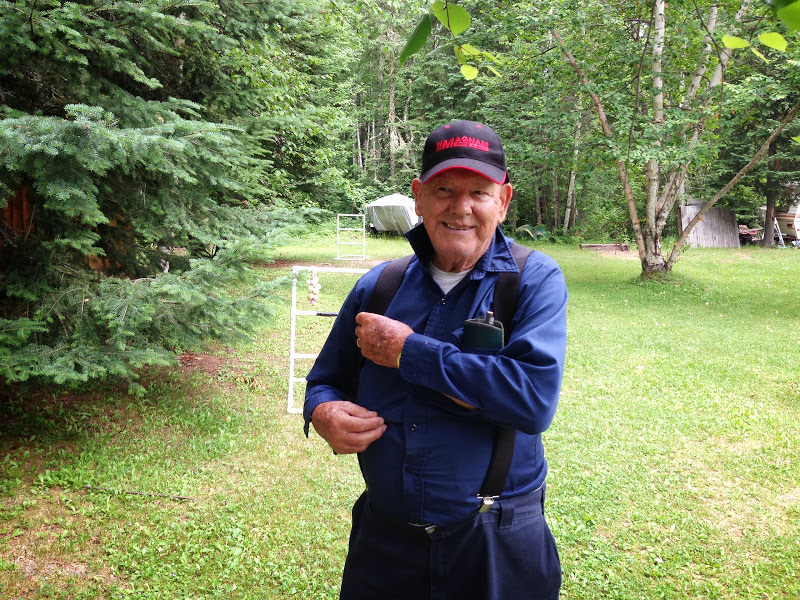