Dollywood!
2001 (or sometime around then)

Get as close to the gates of Dollywood as you can. 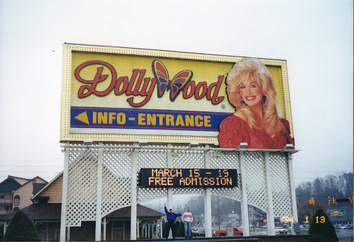 Yup, that was the extent of our planning.  Josh was coming from Pensacola, Florida and Jason and I were coming from West Chester.  We were to meet up at the gates of Dollywood for a weekend of fun and excitement.

So Josh loaded up in his trusty green Ford Ranger, and Jason and I borrowed my Dad's Corolla for the long haul down to Tennessee.  We won't talk about the fact that Dollywood opened for the season the weekend AFTER we arrived.  And we won't talk about arriving at some flea bag hotel at 2AM to be greeted by Josh in his underwear .... wearing a gun.  But we will talk about the fun times we had running around Pigeon Forge for two days.