The third installment of Down The River proved that catching fish is secondary to adventuring with your good buddies.  Don't get me wrong, we definitely caught fish, and some nice ones, but the action wasn't exactly hot and heavy.

The trip started out on Thursday afternoon when Mike, Kenny and I jetted to the camping island to drop off supplies and set up the tent.  The boat ran great, even without the cowling.  We got camp established quickly and stopped in a few eddies on the way back to pick up a few bronzebacks.  Once the jet was tucked back in we did a little shopping at BassPro, went to dinner, then checked into the hotel.  Josh, Aaron and Matt arrived shortly thereafter, but Ryan .... well, after loosing a fight with his trailer hitch he shoved his boat inside his van and drove out the next morning. 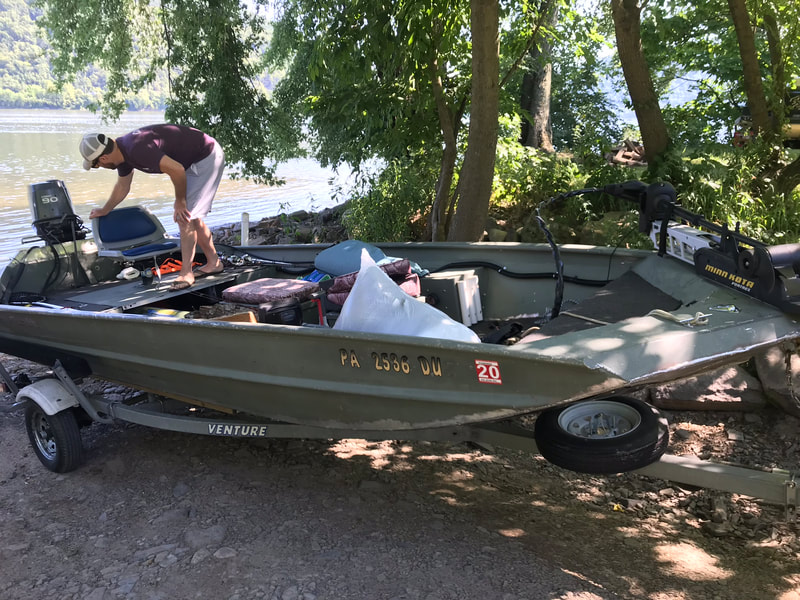 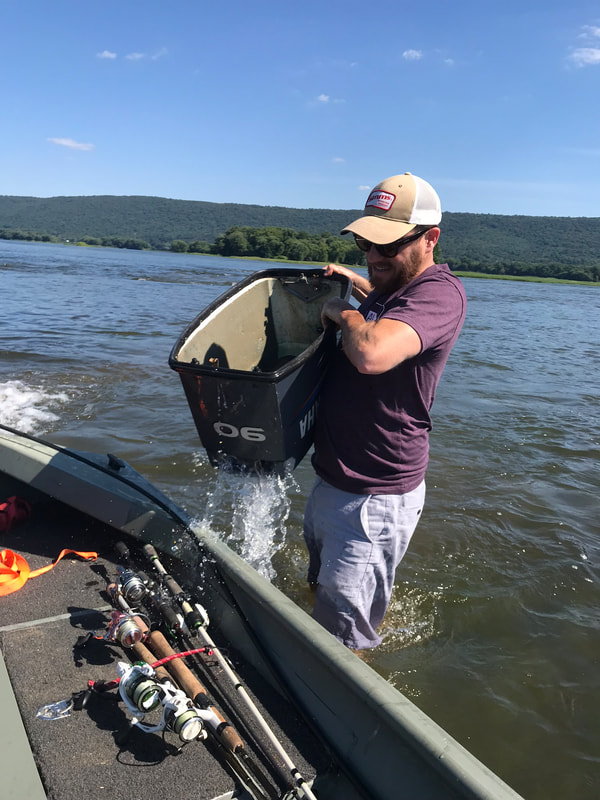 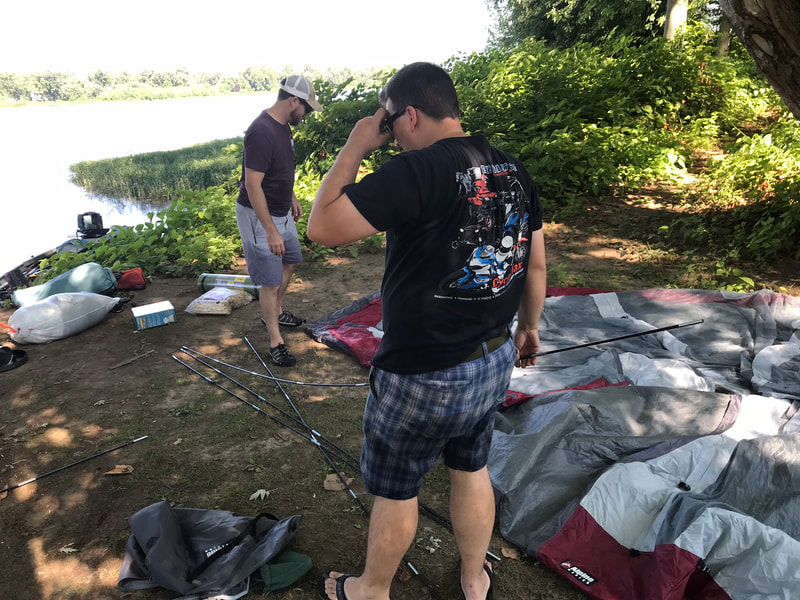 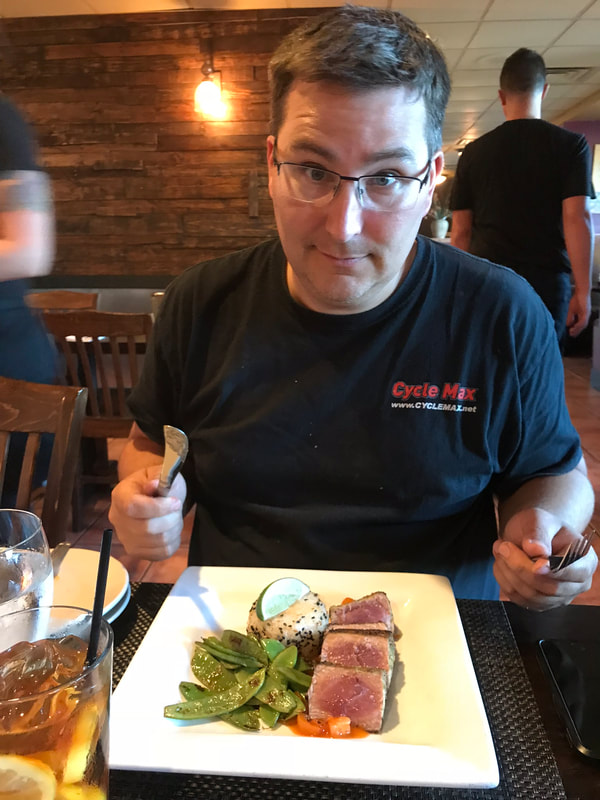 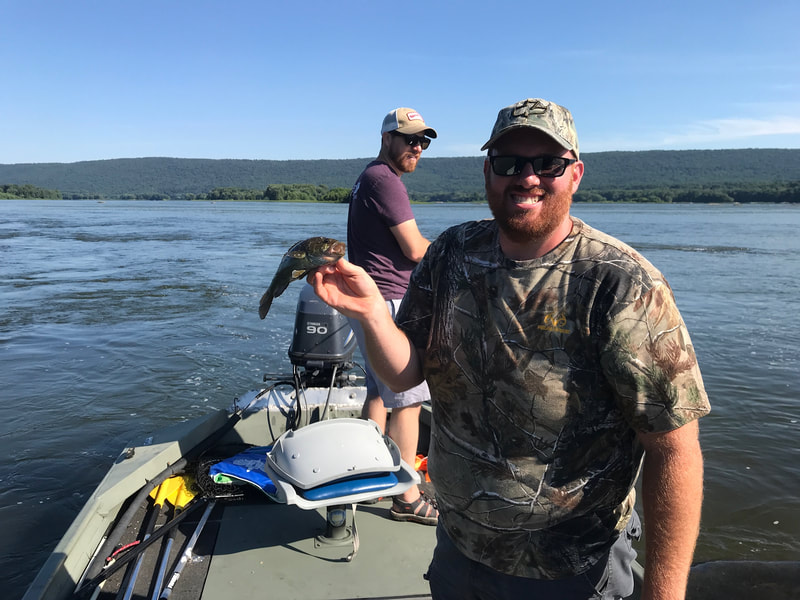 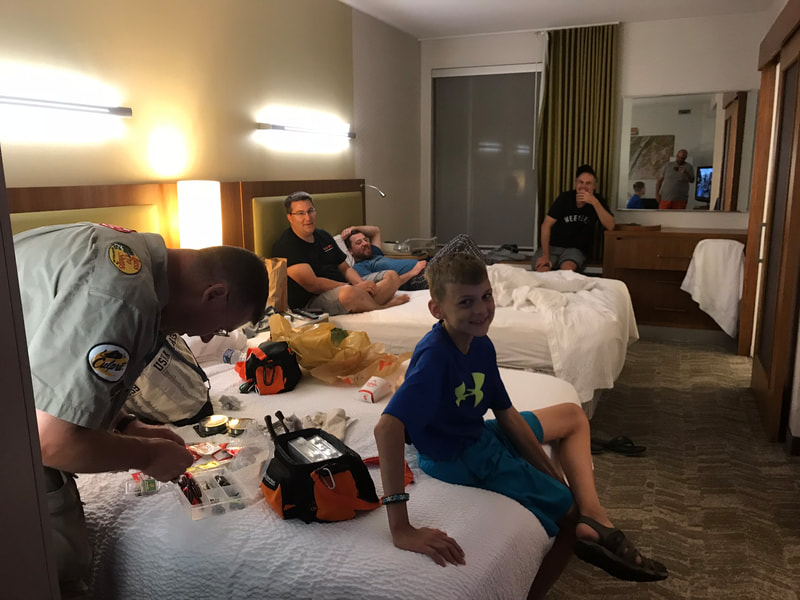 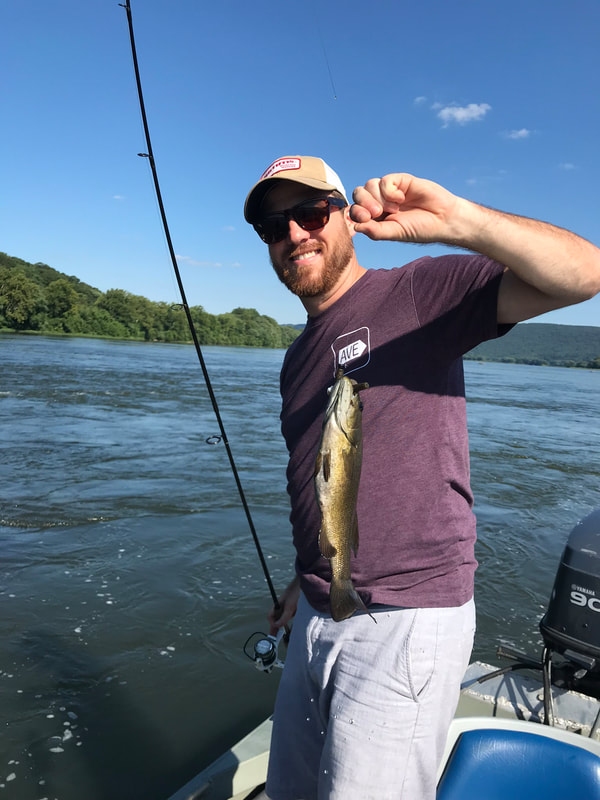 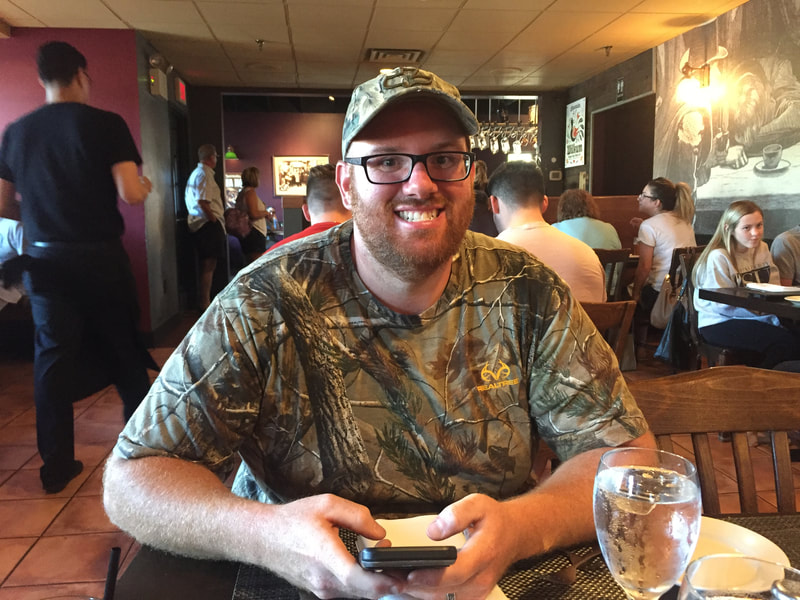 We all woke up EARLY on Friday morning.  It wasn't easy, but the anticipation level was high.  We couldn't wait to launch and be off down the river.  After stopping at Sheetz for nothing but healthy snacks, we arrived at the ramp right as the sun topped the mountains.  Beautiful!

Two aluminum boats slid easily off the trailers and 6 eager men stuffed them full of fishing gear, food, and camping supplies.  Off we went, drifting into the unknown.

It was a long day!  Ryan showed up mid-morning just in time for burgers.  His little row boat worked great on the river.  It's light and maneuverable.  Unlike the two big heavy 17' monsters the rest of us were in.  Matt's boat hit it's share of rocks and I broke the steering on my jet boat trying to muscle over some rocks.  Fortunately Josh rigged up a fix so we didn't have to paddle!  It wasn't all rough though.  Everyone caught some fish and the weather was gorgeous.  Overall it was a peaceful float to the camping island where we made dinner and a fire.  It felt good to kick back and relax and enjoy a good night's rest in a tent.  What could be better? 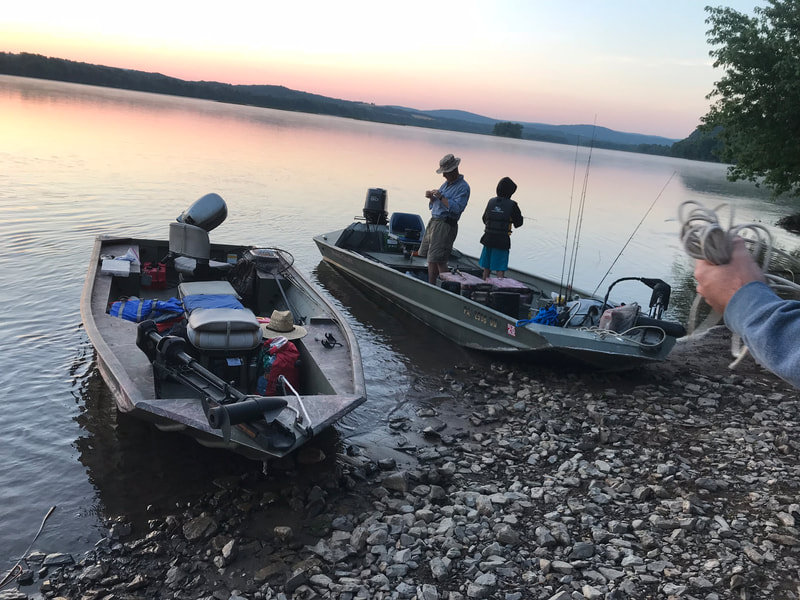 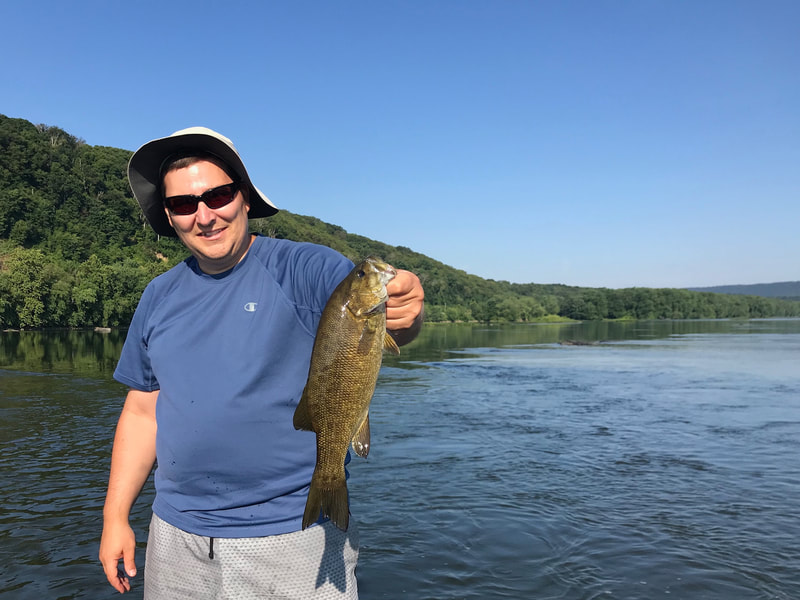 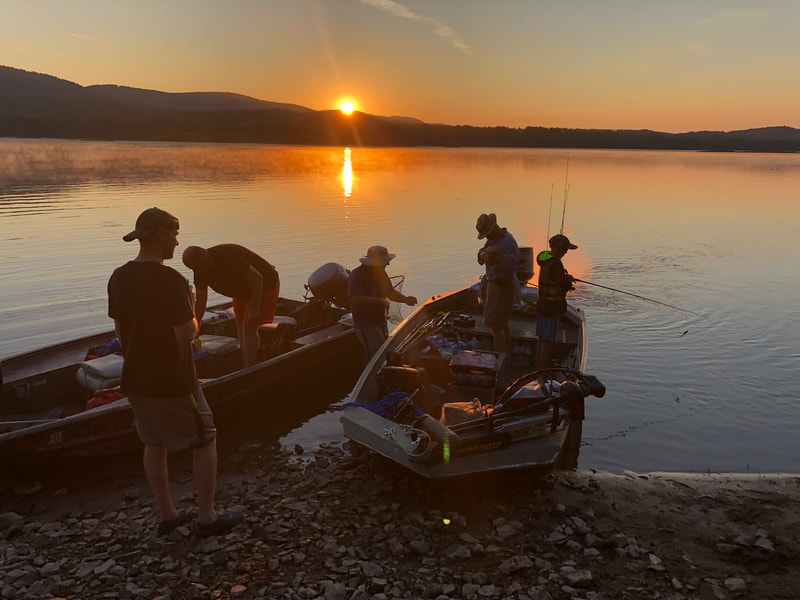 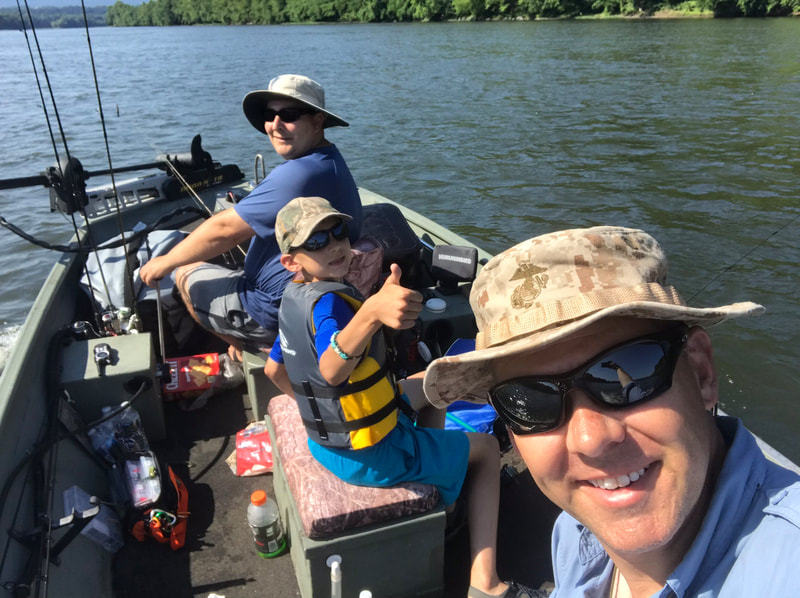 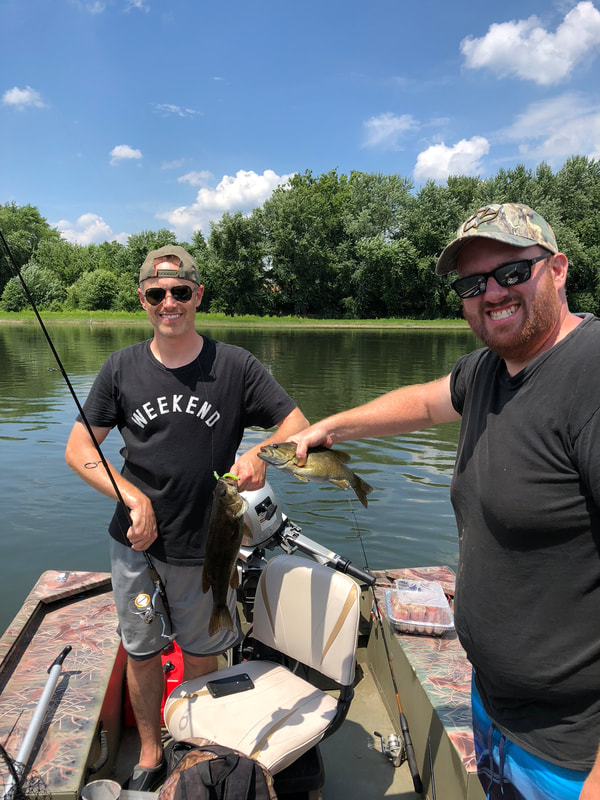 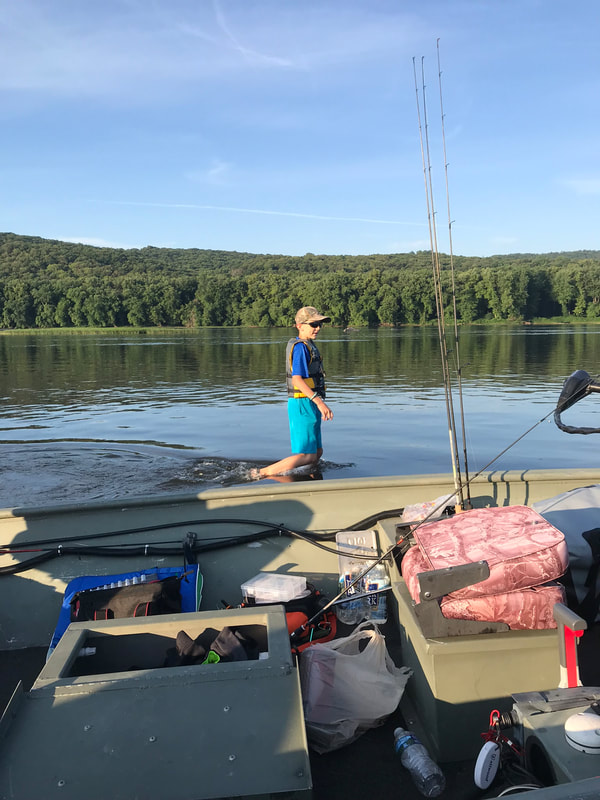 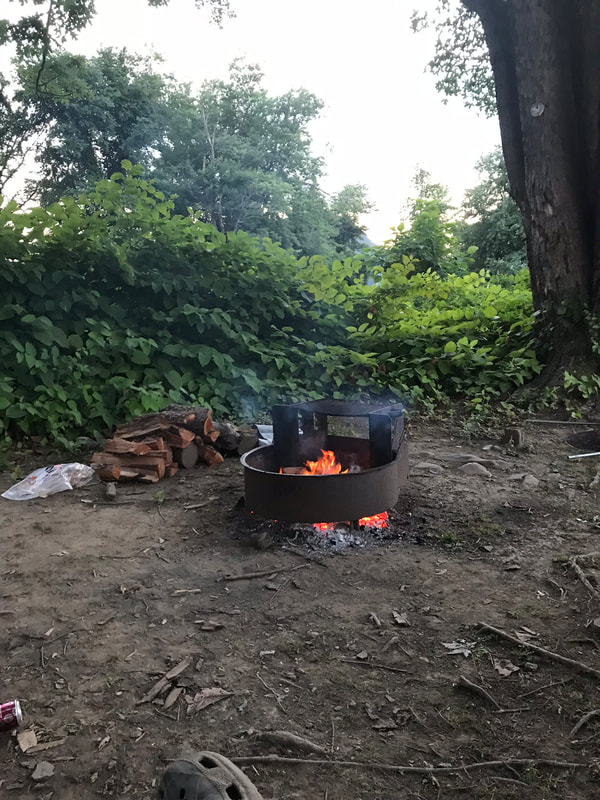 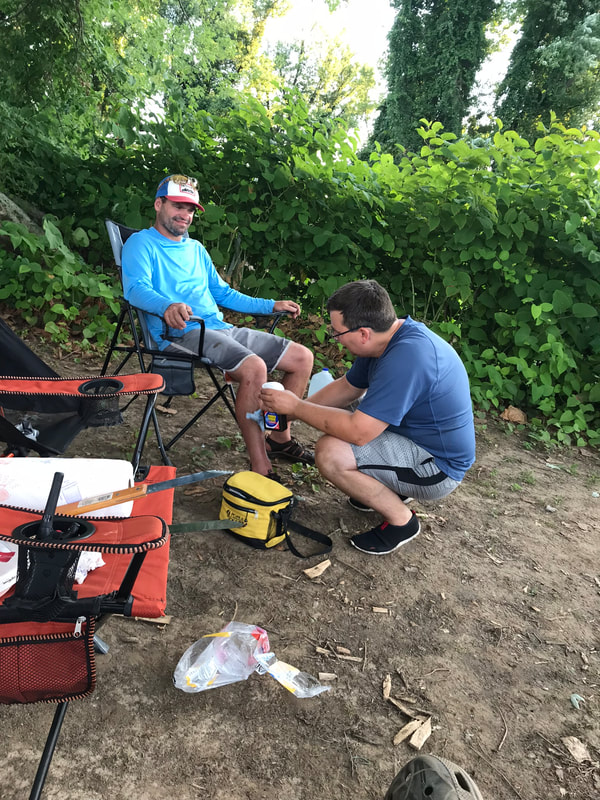 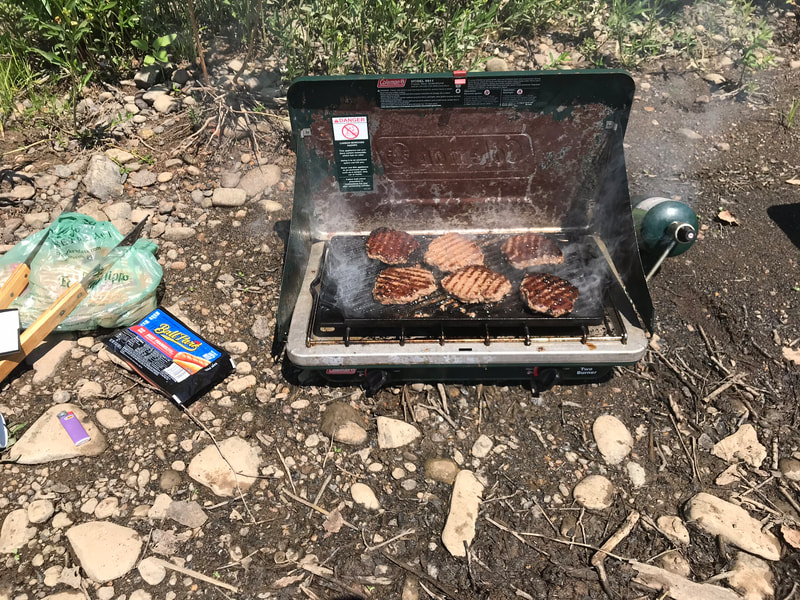 The guys crawled out of their tents on Saturday morning only to find gray skies, wind, and some rain.  No worries!  It's nothing we couldn't handle AFTER coffee and breakfast.

With full bellies we broke camp and loaded the boats.  Back onto the river we went.  Hopes were high that the rain and clouds would bring out the fish.  It did, for some.  Others not so much.  Oh well, at least we had the narrows to look forward to.  That's everyone's favorite part of the float.  Matt, Kenny, and Mike liked it so much they decided to sit on a rock and just hang out for a good while.  You know, to take in the scenery.

Eventually everyone got safely through the skinny water and onto the dock at Marysville.  Except for Ryan who somehow forgot that times moves forward.  He did meet up with us later at the Marysville Diner where we filled up on mediocre food and hit the turnpike headed for home.

Man I love these trips.  They are short but filled with adventure and excitement.  I hope we can do this every year for a long, long time. 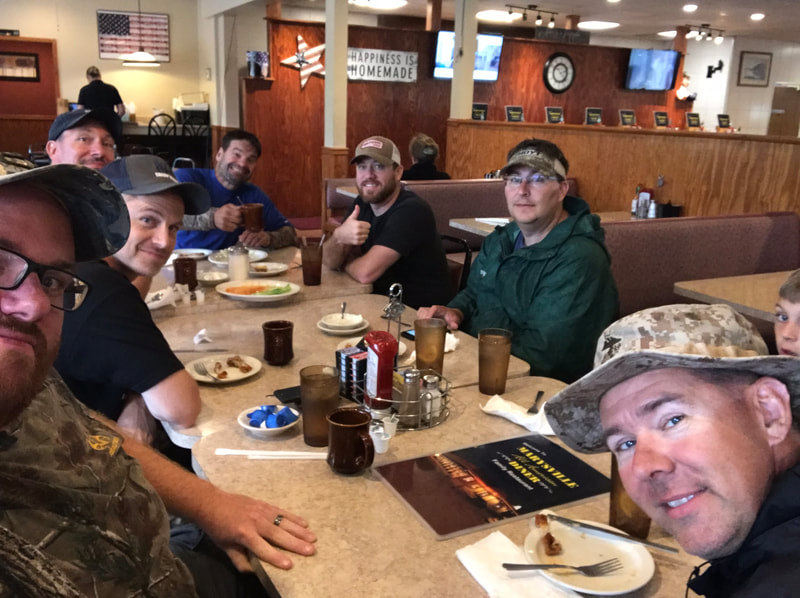 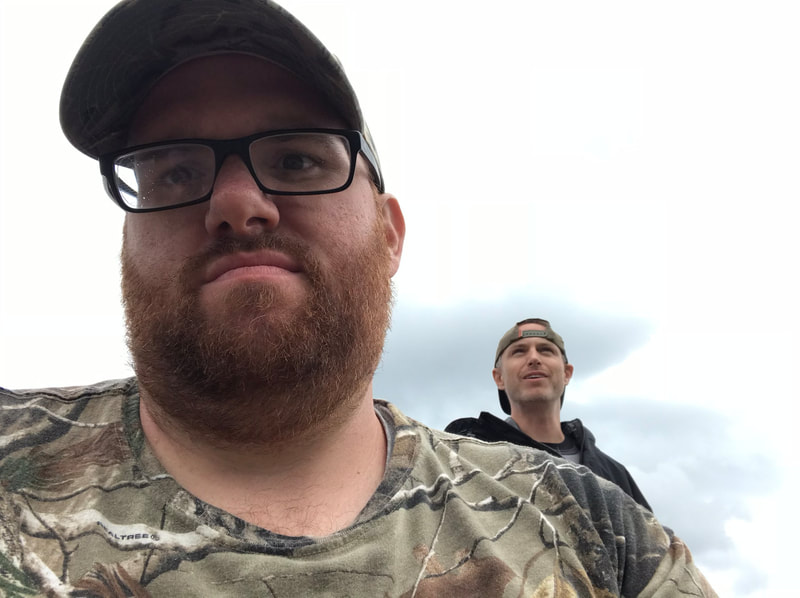 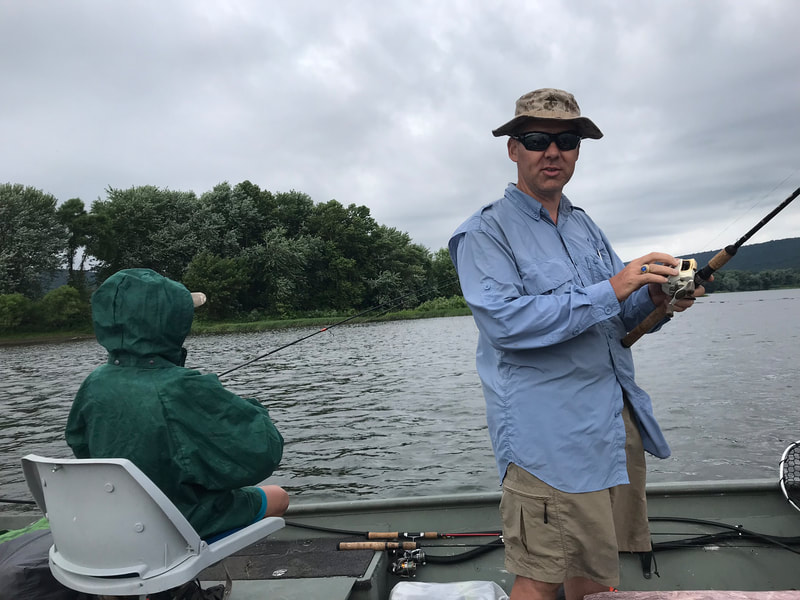 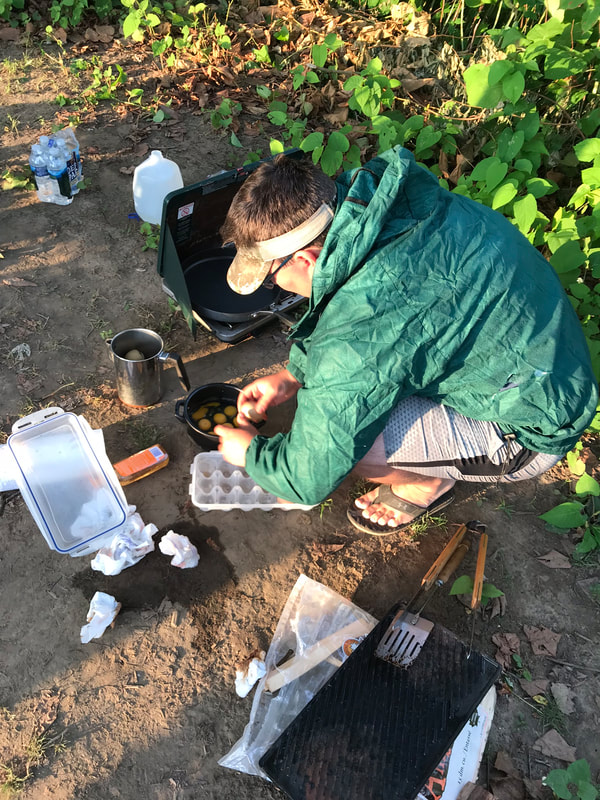 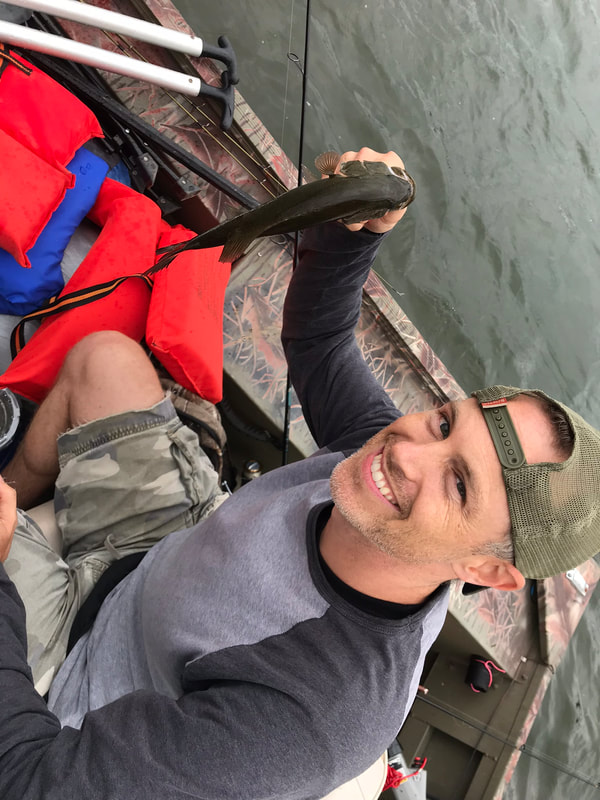 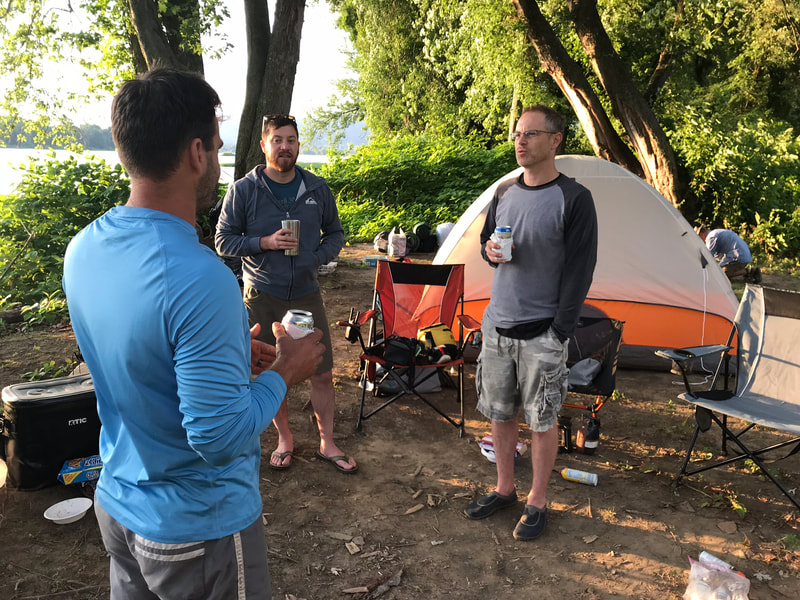 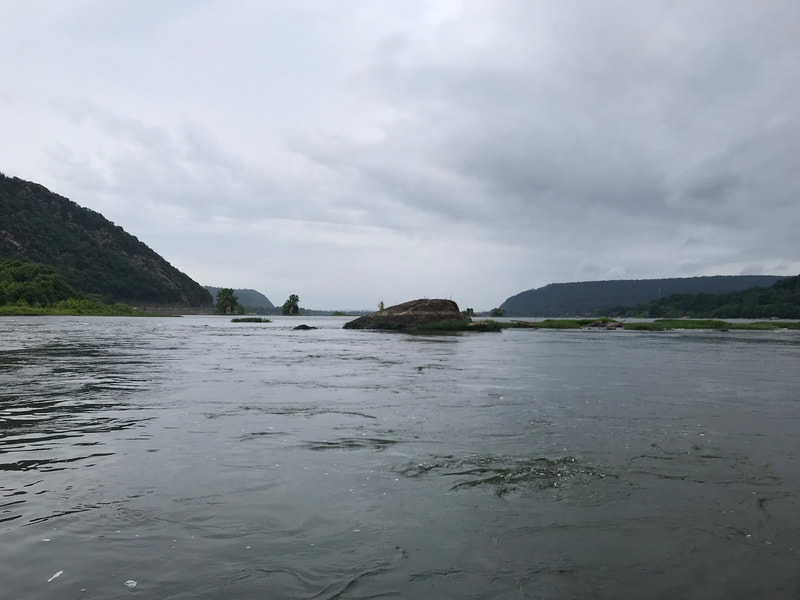 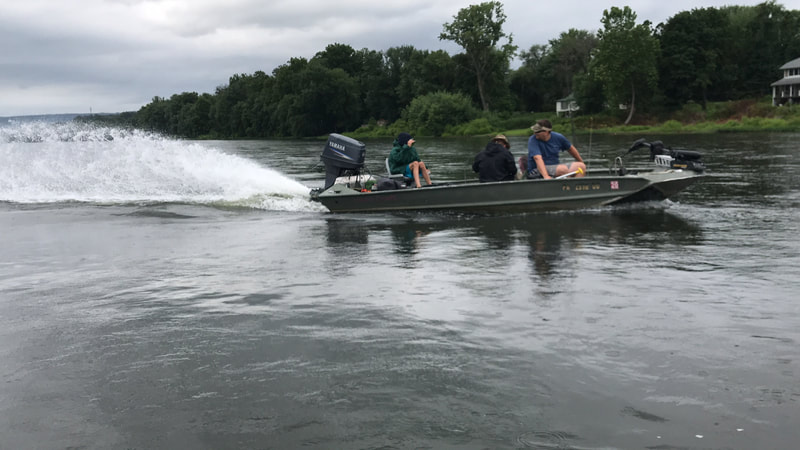 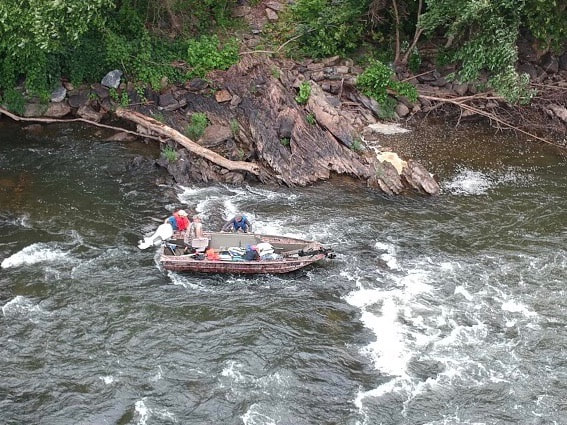