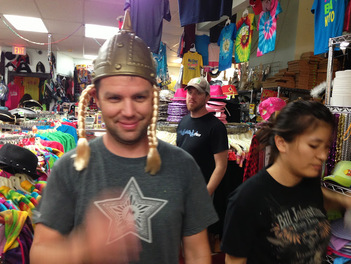 Viking Jason
... is considered excess gear.  Well, that's how it used to be years ago when we first started taking fishing trips.  Over the years we've expanded our gear selection to include gas stoves, air mattresses, coolers filled with food, and sometimes even laptop computers.  For this years's trip to St. Lawrence, we decided to go old school!  Jason, Mike and I packed our fishing gear, some snacks, and one change of clothes .... which never even came out of the bag.  It was awesome to just enjoy the adventure and be spontaneous. 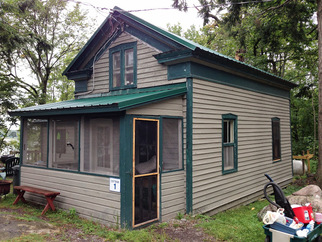 Not exactly five star accommodations, but the cabin was clean and had everything we needed.  We got the larger three bedroom cabin so we could spread out.  Oddly enough though, we all three stayed in the same room.  Hrm?

Per the norm on our trips, we met all kinds of characters at the camp including and old dude named Dale who smoked like a chimney and rode around in a little go-kart and a group of obnoxious Jersey Shore wannabes.  And Amish women. 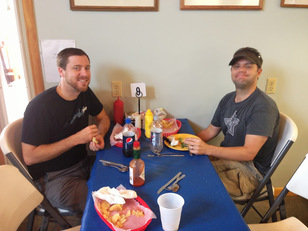 Choochooo
Well the waitresses in that part of the world sure do.  We ate our meals at various eateries in the greater Alexandria Bay area and hit up everything from greasy diners to pizza joints to expensive seafood restaurants.  All in all I'd say the food was pretty good, the ambiance pleasant, and the service .... disturbing.

Its a Party in Alex Bay

Little did we know that only 15 minutes from our cabin was the party hot spot of Alexandria Bay.  With a rock'n night life, high end shopping, and great restaurants, we spent all of our off-water time at this riverside gem. 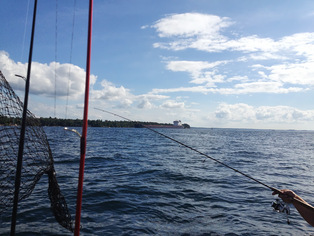 Big ship in the channel
I suppose we could have left the boat on the trailer and found plenty of things to amuse us, but in the end we did come to fish.  And fish we did.  The first day was straight up disappointing.  We fished weedy bays, rocky shoals, flats, islands, and shoreline.  We caught next to nothing.  We were pretty bummed and almost made the call to bail and head to our old friend Black Lake.  Fortunately we didn't.  Once we figured out the bass were holding in deep water just off main channel shoals, we were able to pull up 30 nice fat smallies.  Bottom bouncers, jigs, and drop shots caught all of the fish.  If you weren't right on the bottom, you weren't catching fish.

Watch the video below