Castle on the Lake 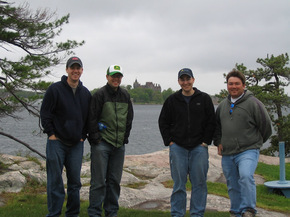 We did have some rain and wind, but all in all it was a decent trip.  We caught a fair amount of fish, mostly smallies, and nothing huge.  But, I do remember fishing on the norther tip of Conger Island with Kevin while he was catching fish after fish on a Wiggle Wart crankbait.  I'm telling you he must have caught a dozen smallies off one point in less than an hour.  It was impressive to watch.