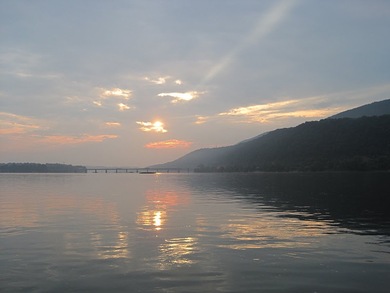 Yup, that's when the alarm went off.  I got out of bed and went downstairs to wake up Jason, who was sleeping on my couch.  We were both tired because we stayed up past midnight watching Wall Street.  Hey, it seemed like a good idea at the time.

Kahler and Campbell showed up a little after 4.  We loaded up and headed out to the river.  We had the canoes in the water right around 6am.  It was a bit cloudy but seemed like a great start to a beautiful day.  Or so we thought.

We fished until just before noon, catching plenty of nice smallies.  It started to rain lightly while we ate but transitioned to a downpoor as we launched the boats.  We pulled over under some trees for about 15 minutes until it let up a bit.  It was at this time that we all discovered Jason should never again wear a white t-shirt in the rain.  We fished for about another hour until the storms really got nasty.  We pulled over again, but it wasn't letting up.  Our best option was to just paddle for the take-out ramp, about a mile and a half downstream.  Unfortunately that last section is fantastic water for fishing, but we didn't have much choice.  It was raining really hard and the lightening was striking hard not too far away.  It was also getting quite cold.  Campbell and I had a bit of a wet ride through the rapids, but everyone made it safely to the car.

After retrieving Campbell's car, we dried off, bought Jason a new t-shirt, and hit up the Marysville Diner for a late lunch.  After lunch we headed home.  Campbell did fine driving until he fell asleep and Kahler made him pull over, which he promptly did.  The River was angry that day, but the fish were rather cooperative.  Between the four of us, we boated nearly 50 smallmouth bass.  Anyway you look at it, that is some great fishing!